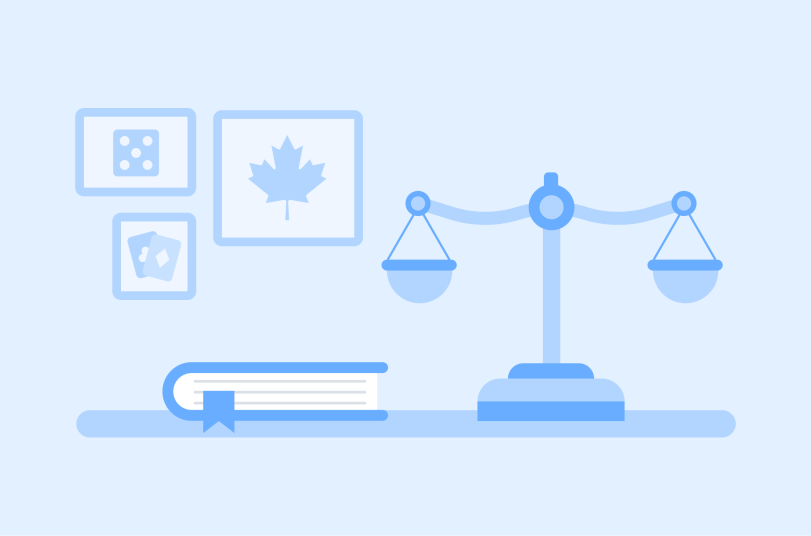 Gambling has taken the US and Canada by storm, but provincial and territorial laws in Canada make the rules about where and when you can play a little confusing. Discover everything you need to know about Canadian gambling laws in this guide.

On this page you’ll find:

Is online gambling legal in Canada?

Technically, online gambling is legal in Canada, provided the online casino site you’re playing at is located offshore. Local laws apply, so it’s important to seek out only trusted online casinos that are fully licensed and independently regulated.

Where the confusion lies is in the provincial laws, where gambling laws in Canada tend to differ from state to state.

“Each province empowers an agency to act as the gaming regulator, and a separate provincial government-controlled corporation to conduct and manage gaming on the government’s behalf. The sole exception is the province of Alberta which merges those functions into a single government agency.”

In 2012, British Columbia launched the first regulated and fully legal casino in North America. The PlayNow site offers online casino games and a virtual poker room to anyone over the legal gambling age who wants to play. However, its virtual casino doors are only open to residents of British Columbia.

In 1985, the federal government decided to hand off all gambling to the provinces. But the Criminal Code didn't actually change in terms of what people can and can't gamble on. These were our takeaways:

Section 201 - states that it's illegal to run a betting house or to be found in one. But it doesn't make any mention of an online betting house, so it's not clear whether Canadian online casinos and poker sites fall under the code.

Section 203 – exempts people from placing bets on behalf of others.

Section 205 – suggests anyone in relation to lotteries of games of chance is guilty of an indictable offence.

While most online gambling offices are located offshore, a majority of the servers for some of the world's most reputable online casinos are actually based right here at home in Canada.

In 1996, a native reserve called Kahnawake Mohawk Nation established the Kahnawake Gaming Commission, offering gaming licenses to online casinos they believe qualified. While online gambling at the time was technically illegal in Canada, the Mohawk Nation argued that because they are their own sovereign nation, they, therefore, have the right to operate casinos.

Now here's where it gets tricky. The Kahnawake Mohawk Nation can essentially run a casino or at least lease space to all sorts of other online casinos from within Canadian borders and not be prosecuted. But private enterprises like horserace companies who operate legally within Canada are forbidden from operating online casinos or poker sites under the Criminal Code of Canada. But that's not to say no one hasn't tried.

In 1995, a company called Starnet Communications was created in Vancouver with the goal of developing, licensing, and providing Internet gambling technology and websites for casinos and sportsbooks. Because of the sketchy Criminal Code, the company set up offshore companies to carry out operations on the site. But the RCMP wasn't impressed.

In 1999, they raided the Vancouver offices, arguing that because the email servers were located in Canada, they were in violation of the criminal code even though the gaming servers were located offshore. That's not to say that every company operating from Canada since 1999 has been in violation of the law, but those who just didn’t get away with it.

How to avoid illegal casinos

The only way to avoid illegal casinos is to be aware of the law and play on reputable, regulated casino sites. Before we endorse any online casino, our team of experts always checks to ensure that the casino is licensed and meets our high standards of approval. Making the job for players even easier.

With such disparity between Canadian provincial laws, it’s difficult to say the current laws will be reformed anytime soon. What's more likely is that gambling laws in Canada will become more liberal. With a deeper clarification of the Criminal Code, online gambling could be permitted across all states with no restrictions.

Unfortunately, if the government were to welcome competition with open arms, the provincial governments would be, well, up in arms since they have the exclusive legal right to run online casinos. Only time will tell.

While it might be tough to operate an online casino from Canada, finding a Canadian  to play at, which ironically might be located in Canada, isn't difficult at all. We have tons of reputable choices, both in terms of provincially run options and internationally regulated sites. And we're willing to bet that it will stay that way for a long, long time.

The contents of this page are provided for informational purposes. It does not constitute legal advice and it should not be relied on as such. Before making any decision regarding participation in any online activity, users should seek independent formal legal advice.

Get awesome bonuses for all of your favourite casino games, from free spins on slots to exclusive welcome bonuses.

Want to know what the top 10 sites are for online gambling in Canada? We’ve got them right here.

The best place to start if you want to get into sports betting. Get all the info you need here!

When real money is on the line you need to make sure you’re betting at the right casino. Find the best ones here.

If you’re all about poker, this is the place for you. Find the best poker sites here.