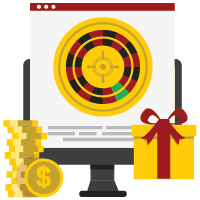 American Roulette is one of the most popular forms of online Roulette played in Canada in 2022, second only in popularity to European Roulette. The two types are incredibly similar in nature, with just a few minor differences that set them apart.

If you're Canadian and looking to jump online and get started with American Roulette, read on for:

What is American Roulette?

Playing American Roulette online in Canada is the same as playing in a land-based casino, especially if you choose to play Live Roulette.

Wherever you play, the difference between American and European roulette remains the same. The double zero on the American wheel doesn't appear on the European wheel which only features a single zero.

However, this slight difference on the wheel can make some significant changes to the odds.

As mentioned, the odds between roulette variants changes due to the difference of the wheels.

With the double zero, American roulette has a house edge of 5.26%, while European roulette is almost half of that at 2.6%.

If you fancy your chances and want to take on the house, take a look at our online roulette strategy guide.

We want you to have the best time possible when playing at Canadian online casinos. This means that, from time to time, we're forced to blacklist some sites, which could have failed their players in one of many different ways. You'll find the current blacklisted casinos below.

Use our top casino list to pick a safe and fun gambling site to game at, or leverage the professional finder tool to track down options that fit better.

How do I play American roulette?

American roulette can be as easy or complex as you want it to be. In its most basic form though, you'll place a bet on the table, before then watching the wheel spin around. If the ball lands on a number corresponding to your bet, you'll be a winner.

Are the bets and table layout the same as other forms?

American roulette is similar to all other roulette games, with one big exception- the addition of a 00 on the reels. Aside from this, you'll still be able to place the same bets in exactly the same way as European or French roulette.

American roulette isn't quite as popular with Canadian players as European roulette, however thousands of people still play the game online each and every day.

Why is it different to other forms of roulette?

The only major difference is the fact that the American roulette table also includes a double zero, which means that the odds are stacked more in favour of the casino. The chips are also a different colour, however this doesn't affect the gameplay in any way.

Are the odds different at American roulette?

Are there any systems that can be used?

Many people purport to know systems that will allow players to get guaranteed profits when playing American roulette, however these do not work. This is because they rely on a player having unlimited amounts of money, which is clearly never going to be the case.

Where are the best places to play American roulette?

You can find the best places to play American roulette simply by checking the top casinos further up this page. At the moment, our number one casino is Jackpot City, closely followed by Spin Palace and Ruby Fortune.