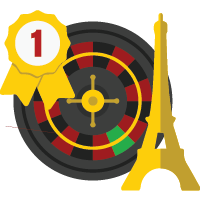 France is where Roulette originated from but, despite being the innovator of the game, this version of the online casino classic has found itself playing second fiddle to the American and European variations in Canada. But, there are still plenty of French roulette options on online casino sites, so why not try your hand at playing the original rules of the game?

Our team has shortlisted the best sites for you, while our in-depth guide shows you the key differences between playing French casino roulette online versus the other online roulette versions.

What is the french version of online roulette?

French roulette online works in much the same way as the popular American and European, with the French Roulette Online Casino wheel favouring the European style of having just one 0 as opposed to the American wheel which also features a 00 tile.

In French casino online Roulette, a rule exists which is referred to as 'La Partage' rule, which is the main thing that sets this version of the game apart from the others. The rule of La Partage works in advantage to the player, in that the house pays back half of any even bet placed, that loses when the ball comes to rest on zero. Giving great odds in favour of the player for this scenario occurring.

How are the odds determined?

Players who are more versed in the other forms of roulette might well enjoy trying their hand at the original rules of the game.

Odds in online French casino Roulette in Canada work much the same as the European online roulette version of the game, owing to the fact the wheel is numbered in the exact same way, with 1-36, even and odd, equally split black and red tiles, and one green zero pocket.

The only variation that affects the outcome is the La Partage rule. When this occurs the house edge is lowered to 1.32% as the rule states that the dealer must pay back the player half of what he or she originally bet, in the event that they lose on an even bet when the ball comes to rest on zero.

Being aware of what edge the house has is a fundamental aspect of any game where you're gambling for real money, be it Texas Hold'em Poker, Baccarat or even another form of Roulette online, other than the French online casino version.

Knowing the house edge will help you make an informed decision about when to bet, and how much to gamble. As we already explained, French Roulette at online casino sites follows the style of European Roulette, so the house edge is normally 2.6%. This is pretty good, especially when you compare it to the 5.26% the American online Roulette gives the house.

In French online casino Roulette the house edge actually reduces to 1.32% in the event of the La Partage rule coming into effect. For some online casinos in Canada, this has resulted in the French style of the game becoming less available, as it favours players more than any other variation of online Roulette style.

Of course you do. Well, we've scoured the net for the online casinos that offer French online casino Roulette for real cash payouts and graded them in terms of the best welcome bonus offered to new Canadian players. Before you commit to a game, be sure to reference this list, where we've compared not only the value of the bonus but also all those pesky T&C's that surround the use of it too.

French online Roulette is certainly less widely available than its American and European counterparts but there are none the less some casinos online that offer it. As with every online casino we rate, these have been put through our stringent reviews process, so if you like what you're read about French online casino Roulette and want to test it out for yourself online, read our list of best rated casinos for Canadian players to ensure you plump for one where you can play safely and with complete confidence.

It's important to us that you always receive the best information possible about online casinos, meaning that we have to tell you both the good and the bad. When a casino has consistently let down their players, we put them on the blacklist, until they change the way they work.

Enjoy safe gambling at a top featured casino with our quality site list or through our professional tracker tool.

How is French roulette played?

At an online casino, French roulette follows the same basic rules as other forms of roulette, meaning that you have to choose your bet on the board, before seeing if the ball lands in the correct position on the wheel. If it does, you'll win a prize equal to the odds shown.

Are the bets and table the same as other forms of the game?

French roulette is different from American roulette, in that the French roulette wheel does not have a double zero. The overall layout of the board and wheel are exactly the same as European roulette though, which will make the transition between the two very easy.

Large numbers of Canadians play French roulette every day, however it certainly isn't as popular as European roulette or American roulette.

How does French roulette differ from American roulette?

The big difference between American roulette and French roulette is the lack of a double zero on the wheel in the French form, therefore meaning that the odds are better in French roulette. Many versions of French roulette also pay back half of any even bet to the player should the ball land on zero. This rule is called La Partage.

What are the French roulette odds like for players?

The odds when playing French roulette are better than any other form of the game. When La Partage is active, the house edge is just 1.32%. This is compared to 2.6% for European roulette, and a massive 5.26% for American roulette.

Are there any systems that increase profits?

Do not pay attention to anyone claiming that they have a system for beating the roulette table, as they quite simply don't work. The mathematics of these systems are correct, however they rely on a player having unlimited reserves of money behind them.

Where are the best casinos for French roulette?

You can find the best places to play French roulette by looking through the reviews here on this site. At the moment, we rate Jackpot City as the top place to play this exciting game, closely followed by Spin Palace and Ruby Fortune.

Is it the same as European roulette?

French roulette and European roulette are certainly very similar, however there is one thing that differentiates them – the La Partage rule. This rule means that, while both games are played identically, French roulette offers a better house edge for real cash players.